This is an unofficial fan site, and has no connection to, or approval from the Sammy Davis Jr. Estate
Sammy’s official website: SammyDavis-Jr.com / Sammy’s official Facebook: Facebook.com/OfficialSDJ 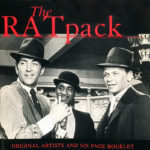 I first heard Sammy sing in March 2000. I was in Melbourne for the Australian F1 Grand Prix, Sammy was in Chicago at the Villa Venice with Frank and Dean. I’d bought a ‘Rat Pack’ CD, heard “What Kind of Fool Am I?” and was blown away. I started collecting Sammy’s music, but there was precious little available on CD, and, at the time, even less information about his recording career easily available online.

Unfortunately, due to well-documented difficulties regarding ownership of the Sammy Davis, Jr. Estate, Sammy’s legacy had not fared as well as his contemporaries. (I was glad to hear that legal battles were resolved in 2014, and that hopefully new projects can cement Sammy’s place as the World’s Greatest Entertainer!) 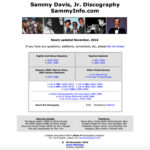 In November, 2002, I decided if I couldn’t find anything, I’d create it myself. I started the Sammy Davis, Jr. Discography page using the discographical tool BRIAN. I searched through the records of Decca and MGM labels, trawled through the master records from Warner’s archives, and with the help of many, slowly pieced things together. 14 years later I’m still updating, correcting, tweaking and adding.

In 2012, I started collecting more information on Sammy’s other activities with the long-term goal of expanding the site. While it’s taken longer to launch than I’d hoped, I’m excited to now have a platform to assist Sammy’s fans find out more about his amazing output as an entertainer.

The plan is to slowly create individual pages for each of Sammy’s LPs, his films, Broadway shows, and TV appearances. Beyond that, the blog will provide a place to put tidbits on his career, highlight clips from YouTube, specific recordings, and all kinds of other randomness.

For additions, suggestions, corrections, or comments, please feel free to contact me using the form below!

This site’s discography is created using BRIAN – The Discography Compilation Application (for Mac and Windows).

BRIAN is a relational database application for compiling standard discography information. It is named after Brian Rust, who perfected the chronological recording session format for print discographies. BRIAN tracks every aspect of a record date, from sidemen to songs to composers to issues.

BRIAN was created and is developed by Steve Albin, who has provided a huge amount of assistance to this project – right from the start in 2002.

In addition to the books written by and about Sammy, I have found the following sources particularly useful:

Some pre-1965 Reprise recording dates and some details of live 1970s sessions were sourced from the highly recommended book Beyond Bojangles (2014) by Florian J. Kerz and Ivar Halstvedt.

The material on these sites were reproduced for enjoyment, review and information purposes only. The images contained within this site are believed to be in the public domain. Most have been sourced from various online libraries. Use of this material is not intended as a copyright infringement of any artist’s or any other entity’s copyrighted material. If you believe that any material found on this site is your copyrighted work, please contact us and we will immediately remove it, or provide appropriate credit, depending on your preference.